While advances in agronomy and the performance of individual crops have helped grain growers to maintain their profitability, current farming systems are underperforming; with only 30% of the crop sequences in the northern grains region achieving 75% of their water limited yield potential.

Growers are facing challenges from declining soil fertility, increasing herbicide resistance, and increasing soil-borne pathogens in their farming systems. Changes will be needed to meet these challenges and to maintain the productivity and profitability of our farming systems. Consequently, the Queensland Department of Agriculture and Fisheries (QDAF), New South Wales Department of Primary Industries (NSW DPI) and Commonwealth Scientific and Industrial Research Organisation (CSIRO) are conducting an extensive field-based farming systems research program, focused on developing farming systems to better utilise the available rainfall to increase productivity and profitability, with the question;

Can systems performance be improved by modifying farming systems in the northern region?

Experiments were established at seven locations; a large factorial experiment managed by CSIRO at Pampas near Toowoomba, and locally relevant systems being studied at six regional centres by QDAF and NSW DPI (Table 1). Several of these systems are represented at every site to allow major insights across the northern region, while the site specific systems will provide insights for local conditions.

The following report details the systems being studied in Billa Billa (Goondiwindi), how they are implemented locally and the results after the first three years. Data and system performance indicators have been developed to compare performance across sites. The Billa Billa site is located 50 km north of Goondiwindi on the Leichhardt Highway. The soil is a grey vertosol. The original belah and brigalow trees were cleared and the paddock used as a long-term pasture before being developed for crops in the late 1990s. The previous paddock management has meant there was 360 kg N/ha available at the beginning of the trial.

The paddock grew chickpeas in 2014, so was quite bare prior to commencing the trial in autumn 2015. All of the systems were planted to wheat in the first season to provide stubble cover, yielding 4.7 t/ha. After harvesting this crop, the higher soil fertility system had 75 t/ha of compost broadcast across it to supply an additional 10 t/ha of carbon to this system, which increased the soil carbon by 27% in the top 30 cm of soil. Deep phosphorus was then applied to all of the cropping systems supplying 70 kg P/ha applied in the form of Granulock® Z. After 2015, rotations in the different systems have been quite diverse (Figure 1).

The summer of 2015-16 was dry with storm rain contributing to the majority of the profile moisture accumulation. The higher crop intensity system triggered an opportunity to be double cropped to mungbean on 15 January. The next effective rainfall this crop saw was after spraying out, so yielded 0.35 t/ha (Figure 2). This double-cropped mungbean crop was planted with the same starting water as the baseline system, which was held in fallow over summer and planted to barley in 2016. This gave the higher crop intensity system a fallow efficiency advantage of 71% versus 30% in the Baseline system(Figure 5). However, differences in the timeliness of in-crop rain had a major impact on the yield outcomes of the mungbean and barley crops (Figure 2).

Autumn 2016 was also dry, requiring faba bean and field pea to be deep sown in the higher legume and higher crop diversity systems respectively. Baseline, higher nutrient supply and higher soil fertility systems were planted to barley on 1 June (Figure 1), with the season remaining quite wet until November. The faba bean and field pea crops matured in early October, and had a wet harvest with a full profile of water, allowing a double crop opportunity in both of these systems. However, the barley in 2016 (baseline, higher nutrient supply and higher soil fertility systems) lodged and put out late tillers, so was harvested mid-November with weather damaged grain. Grain yields averaged 6.3 t/ha for barley and 3.45 t/ha for faba bean and field pea (Figure 2). The yield per mm of water used (water use efficiency) of the two pulse crops were similar to each other, but lower than the barley grown in the same season (Figure 5).

Differences in the economics of the systems to date have largely been driven by the high yields of the 2016 winter crops (Figure 3). The high starting available nitrogen levels at this site has allowed the baseline, higher nutrient supply and higher soil fertility systems to grow 11 t/ha of cereal grain over the first two years, without the expense of nitrogen fertiliser. As such, these three systems have been the most profitable, with the only difference being a higher starter P fertiliser rate in the two higher nutrient systems.

The higher legume and higher crop diversity systems were both planted to pulses in winter 2016 that yielded similarly to each other, but the value of faba bean vs field pea meant the faba bean income and $/mm was similar to the much higher yielding barley, whereas the field pea was quite a bit lower (Figure 3 & 4). The pulse crops in 2016 appear to have fixed nitrogen despite the high starting N. They have similar nitrogen removed in the grain to the barley crops but have an extra 50 kg N/ha left in the soil profile post-harvest. Add to this, the early maturity date of the pulses left an extra 150 mm plant available water, which provided an opportunity double crop. However the dry summer that followed provided poor returns on that double-crop.

The lower intensity and higher intensity systems were planted to sorghum on 15 October, with 200 mm and 120 mm plant available water (PAW) respectively. With only 80 mm in-crop rainfall, these crops were low yielding at 1.5 t/ha and 0.8 t/ha (Figure 2). These yields both lined up with the APSIM predicted yield for the driest 10% of years, for their starting plant available water.

After 2016 winter crop was harvested with a full profile of water, the higher legume and higher crop diversity systems were planted to mungbean and sorghum respectively at the next planting opportunity, which wasn’t until December (Figure 1). With no effective rainfall before flowering, the mungbean yielded 0.15 t/ha, whereas the sorghum held on to take advantage of autumn rain for a yield of 1.5 t/ha, harvested in July.

The three systems that grew barley in 2016 were all planted to wheat in May 2017. The higher crop intensity system was also double-cropped to wheat at the same time. This crop received 25 mm rainfall prior to maturity, but received a further 83 mm before it could be harvested. The fallowed systems (baseline, higher nutrient supply and higher soil fertility) yielded 1.7 t/ha on average and the double cropped wheat (higher crop intensity) yielded 1.4 t/ha. These systems had similar crop water use efficiencies (WUE) of 12.5 kg/mm on average (Figure 5). The difference in yield is reflecting differences in starting plant available water.

The mungbean grown in the higher legume system had only dried the top 30 cm of soil, so was one rainfall event off being planted to wheat. With the dry winter this did not eventuate, but 80 mm of rain in October allowed it to be planted to spring sorghum with a good profile of plant available water. This sorghum was looking good with 200 mm of in-crop rain, but a dry January capped the yield at 2.9 t/ha with 40% screenings.

The wet spring in 2017 allowed the higher intensity system to be double-cropped again to sorghum. This crop had a dry start, but 150 mm in February and March allowed it to tiller again for a yield of 2.4 t/ha, harvested in May.

Six systems have been planted to winter crops in 2018 (Figure 1). Higher crop diversity has been planted to canola and lower crop intensity to wheat, both after long fallows. Baseline, higher nutrient supply and higher soil fertility were planted to chickpeas after a short fallow and higher legume double-cropped to chickpeas. This leaves only higher crop intensity in fallow, having received no rain from sorghum harvest to the end of June 2018.

Figure 1. Crops grown at the Billa Billa farming systems trial, presented on a time scale. The coloured sections are planting to harvest of each crop, and the grey bars are fallow periods. 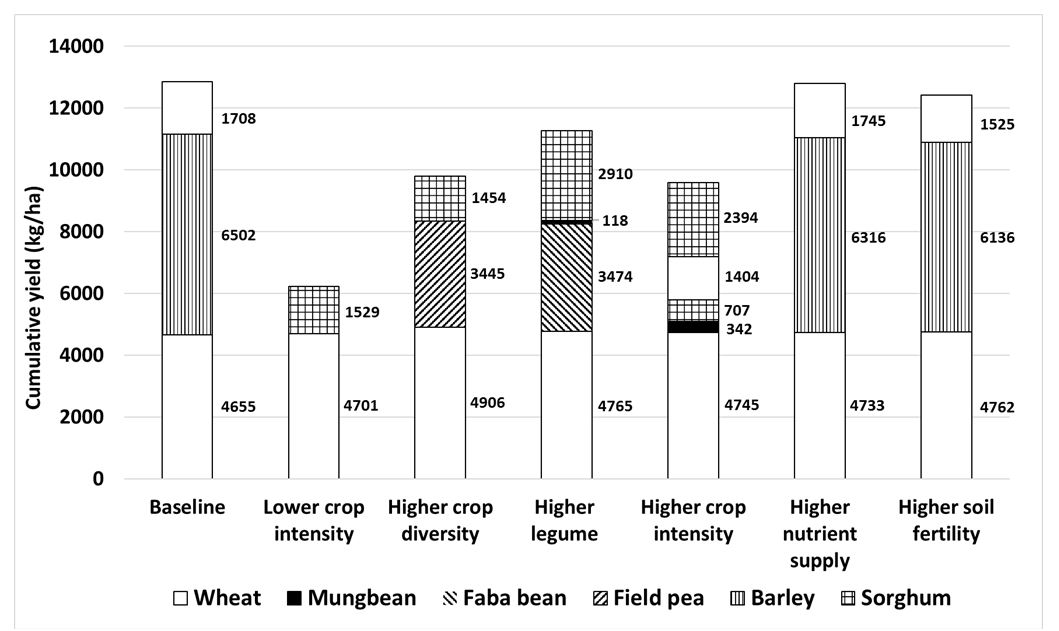 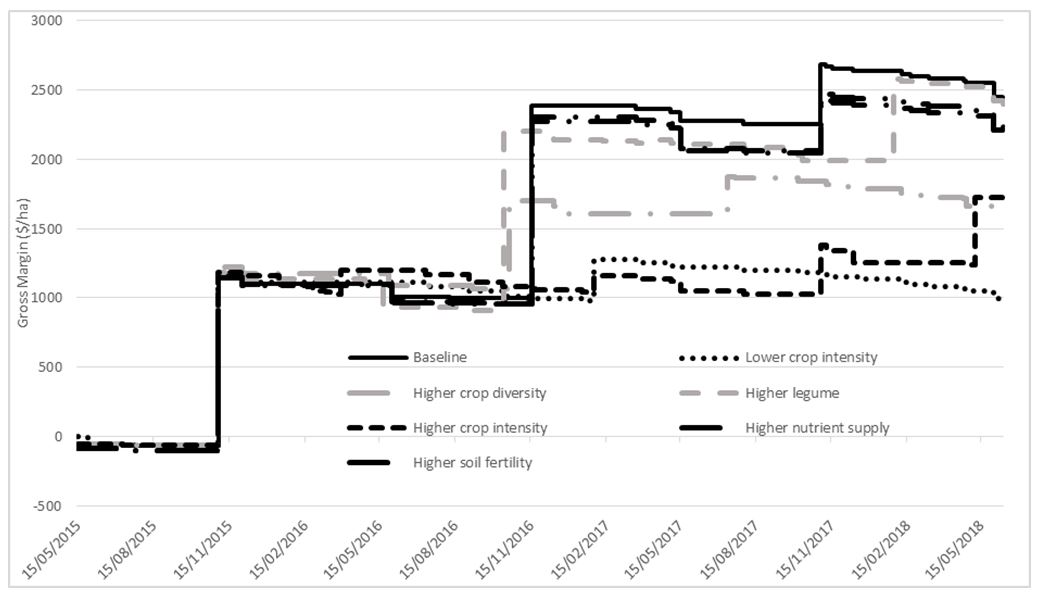 Figure 3. Cumulative cash-flow from the seven grain systems at the Billa Billa farming systems trial. This shows the actual production costs and incomes (based on 10 year average commodity prices), over time for each of the systems.

Figure 4. Gross margin per mm of rainfall for each crop grown, including the preceding fallow period, and total for each system (up to the harvest of the last crop). The coloured bars represent the crops depicted in Figure 2.

Table 2. Grain pricing used in calculations based on median prices over the past ten years, less $40/t cartage costs,
for selected crops